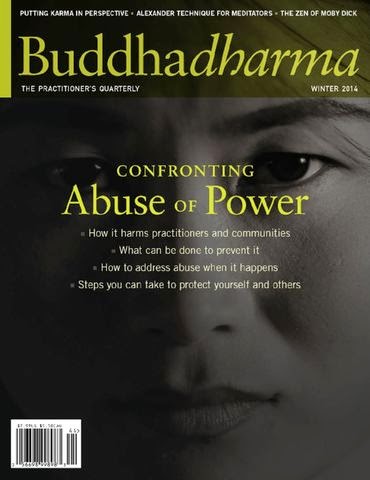 Passed along in email was a copy of the latest Buddhadharma Quarterly cover article "Confronting Abuse of Power." Participants in the "forum" offered as framework for the topic were/are: Shinge Roko Sherry Chayat, Hozan Alan Senauke, Lama Palden Drolma and David Whitehorn.

No doubt someone will find it informative and be willing to pay the freight to read it. I won't -- not even for free.

Like a lot of such 'concerned' Buddhist articles, it's a bit like reading Israel's latest press release about one of their rocket attacks on Palestinians: One point of view is apparently enough when engaging the subject ... what the Palestinians say is irrelevant in the spotlight of righteous and rightful indignation: Not one victim of Buddhist power abuse seems worthy of being included in this concerned forum.

"We care," the title topic implies, but not enough to include anyone who was victimized. We'll be happy to take the additional sales that are likely to evolve from the topic. We'll be happy to be known as fair-minded and caring Buddhists ... but we will steer clear of the painful core: The victims may be lying after all and we wouldn't like to open ourselves to a lawsuit. We prefer to admit the situation exists and ask the talking heads for their viewpoints within the wondrous construct called Buddhism ... but we will refrain from anything like a gritty compassion.

It is a bit like putting a very pretty bandage on a very large shrapnel wound together with the warning, "let's not get the bandage dirty."

Strange to see -- or maybe not -- institutions and their minions doing what individuals do in tight situations ... excuse their lapses based on sincerity when sincerity that is complicit in some heavy bleeding hardly matters much. Honesty goes begging but ...

"We can only do our best," the snivelers assert.

No one says "bullshit!" because that's not a nice word.

But someone's bound to swallow it, I guess.