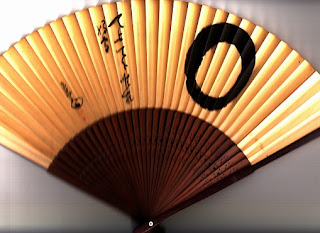 In preparation for a memorial service scheduled yesterday for Taitetsu Unno, one-time professor of world religions at Smith College up the street here, I dug out an old and favored fan. It was a warm day and I could imagine being hot while sitting with others as Tai was remembered at the college chapel. I wanted to go because I felt, without much specificity, that I owed him a thank you for the generosity he had shared with me when I was a reporter and he was one of my go-to sources when it came to spiritual matters about which I might have been writing.

My body was not in a cooperative mood as the memorial service drew near and so, in the event, I didn't go, wasn't hot and didn't wave my fan. My gratitude remained but I think Tai would have understood: Old age has its own exigencies.

But the fan had been scooped up in preparation and sat awaiting my pleasure.

The calligraphy on the fan is a reproduction of some famous Zen teacher's brush. I used to remember his name, but no longer do. The words were attributed to the Buddha (Gautama) and have long managed to rattle my cage, no matter who, if anyone, uttered them: "Above the heavens and below the earth, I alone am the world-honored one." I don't even care if the translation is flummoxed ... those words, whether true or false, dangle and tease like a worm on a hook. They are serious even if they are wrong.

For example: A student who sets out on a spiritual practice almost invariably does so because of some sort of discomfort. On discovering a spiritual discipline that seems to address the discomfort, s/he signs on and gets cracking: attachment, expectation, ego and whatever other frailties are approached according to the discipline chosen. Meditation, chanting, incense, altars, bows ... they are accepted tools in an effort to clear away delusions that have fogged the scene and scored the heart. It's a serious effort, no kidding. Years may pass and practice may wax and wane. There probably comes a point when someone is willing to say, "I am a Buddhist" or "I am a Christian" or "I am a Hindu" or "I am a Muslim.

Or perhaps a dollop of flip is thrown into the mix. The serious savvy gets so savvy and serious that laughter or teasing may tint the canvas. It's still serious, mind you, but there is also an element of not-so-serious ... Still, the elements that led to practice hover and persuade. I-am-weak-it-is-strong, I-am-impure-whereas-it-is-indubitably-pure. Practice is still on a war footing, however subtle and wily. Beware the imagined foe! Grasp the hand of a vaunted ally.

But, using "god" in the wider sense, did it ever occur to you that god (pick your format) is highly unlikely to take him/her/itself seriously? Does a robin hop across the lawn and search out worms with an awareness or interest in the fact that it might be a "robin?" Hunting worms is a serious business but what robin in its right mind would do more than hunt worms. Anything more would be to detract from the serious business of hunting worms.

And likewise the seriousness of god cannot be serious as far as god is concerned.

And likewise the seriousness of being you is never an issue where you serious up.

Tall, short, weak, strong, holy, unholy, certain or uncertain ... it cannot be dismissed and it cannot be clung to. Where there is nothing to compare to or with, who makes a serious case where the seriousness of the case has long since been made?

Relax. Eat some worms.
Posted by genkaku at 9:26 AM