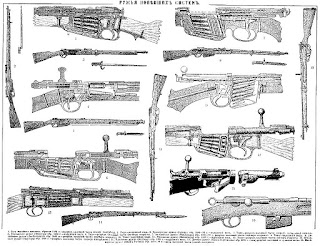 There are hundreds of wonderful and horrific things happening in the world, but this feckless mind entered the day with two bits of thin-tea curiosity:

1. Wasn't the Mosin-Nagant rifle (used in World War I among other, multiple venues) a French weapon? No, it was Russian and seemingly as popular as the AK-47.

2. In London yesterday, over 60 actors participated in a 15-hour performance of Homer's "Illiad" ... and a lot of people turned out in one way or another to hear it. I have never read the Illiad and in my generation, that is probably something of an educational flaw. It's too late for me, but there is something pleasant about the almost counter-cultural British effort ... something literate in an increasingly-illiterate age. An educated rat-fuck of sorts.

And, having been nudged and tickled into consciousness by these two totally-useless bits of interest and information, it is time to get back to wrapping up the silly column I have promised to write.
Posted by genkaku at 8:02 AM