trying to bury the journalists 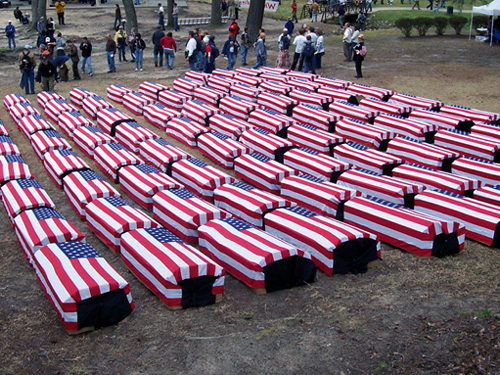 During the Vietnam war, the flag-draped caskets of the dead or the rows of body bags awaiting transshipment were photographed for the benefit of an increasingly-restive public that was footing the bill for the war. In 1991, the bad-PR prop wash from such pictures and realities was well-remembered and the Bush administration said media coverage would no longer be allowed because it infringed on the privacy of the families affected.

This bullshit "caring" remained in place until 2009 when it was revealed that more than two-thirds of the families affected, when asked, said media coverage was OK with them. The "privacy of the family" was off the table in Dover, Delaware, where the latest crop of caskets is generally delivered, and elsewhere.

If there are no bodies, there is no war, right?

Now the Defense Department has taken another step in de-fanging an intrusive media that might unduly dull the rosy picture a military effort might prefer:

WASHINGTON (AP) — New Defense Department guidelines allow commanders to punish journalists and treat them as "unprivileged belligerents" if they believe journalists are sympathizing or cooperating with the enemy.
The Law of War manual, updated to apply for the first time to all branches of the military, contains a vaguely worded provision that military commanders could interpret broadly, experts in military law and journalism say. Commanders could ask journalists to leave military bases or detain journalists for any number of perceived offenses.

Now, it appears, a journalist who catches a military commander being a fuck-up or a fool can be dealt with summarily: Clap him/her in irons!

True, there is a tension between journalism and military needs. It has always existed. To my knowledge, no responsible journalist released information that would give "aid and comfort to the enemy." But covering and camouflaging bad or ignorant behavior? I don't know about you, but I prefer the most detailed facts possible when it comes to using my money to kill Americans ... or anyone else for that matter. Journalism is already corrupt enough without sending it further still into the brambles of agitation and propaganda.