by accident, on purpose 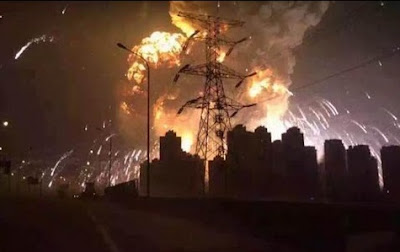 In the port city of Tianjin, China, two huge explosions on Wednesday -- the first compared to three tons of TNT, the second to 21 tons -- claimed 44-lives (and counting) and left hundreds injured. To date, no one has suggested it is anything other than an accident in an area known to store hazardous materials.

In Baghdad, Iraq, a massive car bomb early today claimed at least 67 lives in a popular food market. The Islamic State, currently the most popular 'terrorist' organization on Western radar, took responsibility. Islamic State takes pride in a violence that it seeks to convert to something that is not called a dictatorship, but certainly hopes to call the social shots through its version of religious law.

It's just two incidents... 44-plus dead in one; 67-plus dead in the other. The first (it seems) by accident. The second very much on purpose.

There is a childish liberal inside me that asks, "Aren't the disasters that people perpetrate on themselves without intending to enough to suggest that prefabricating disasters is hardly necessary?"

It is, as I say, just a childish whining within.
Posted by genkaku at 8:13 AM