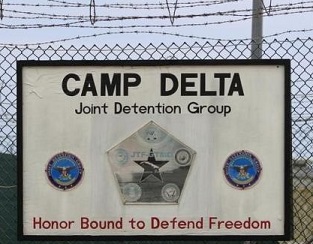 Before midnight on Friday, President Barack Obama's Justice Department is due to either block or accept a legal request to free a Guantanamo Bay prisoner who weighs 74 pounds (33.5 kg) after an eight-year hunger strike.Lawyers for the detainee, Tariq Ba Odah, say the way the department decides will be the clearest indication yet of how serious Obama is about closing the detention center before he leaves office in January 2017.
They accuse the president of being unwilling to use all his executive powers to empty the camp and are skeptical of his commitment.

"Honor Bound to Defend Freedom" -- how is this unexamined and unexplained axiom not a bit of banana republic eyewash? It used to be that a "speedy trial" was a cornerstone of American jurisprudence.
Posted by genkaku at 9:47 AM