where the helium runs out

Although one of the functions of age is to pretend to acknowledge that things do, in fact, change (it's so adult, dontcha know), still there is a lingering habit of believing/asserting that that observation applies to everyone else ... but not to me.

Last night, watching the TV quiz show "Jeopardy," three contestants above the age, I'd guess, of 45 or 50, were asked to identify a Hollywood star from a photo. On seeing the photo, I immediately identified the picture as Gregory Peck, a star of some stature as I was growing up.

Not one of the contestants even pressed the buzzer that would have allowed him or her to give the correct name and thus accumulate points in the game.

And even when I was confronted with the cold, hard fact, I found my mind racing around, trying to dredge up a reason that three reasonably intelligent and seemingly-informed adults could NOT identify what to me was so slam-bang, knee-jerk obvious.

Sometimes the obvious is far less pleasant and easy than I imagine.

This morning, after I dropped my wife off at work, I drove home listening to a public radio segment about the shifting sands within the Roman Catholic Church. A Google teaser says: "The scandals of recent years have destroyed popular support for the church in Ireland, with many Irish people ignoring the hierarchy's guidance on social issues."

Another monolithic assumption in my background -- the Roman Catholic Church which I always acknowledged as a force to be reckoned with even if I disdained it -- loses its helium. I have suspected or felt for some time that religion as a whole is sagging by impact and importance. Atheists may delight and may in fact be right, but from where I sit atheism is just another religion waiting to enter, stage left, perhaps.

The church, the NPR segment asserted, is no longer the voice of truth. It is no longer right just because the church says it is right. Its ineffable mystery -- the mystery to which the church fathers were exclusively privy -- is no longer front and center and woe betide the transgressor who doubts. Now, with the ineffable helium waning, the church -- and perhaps religion in general -- drips away into social and ethical action at its best. The monolithic mystery is outflanked and overcome... as, some might say, it deserves to be.

Dribbling away. Hoist on its own petard. The church was a stone in my background castle-like tableau of understandings. Now, slowly, that thread is removed. It would be unwise to ignore the diminution in the same way it would have been unwise to ignore the accretion. But I am full of unwisdoms. 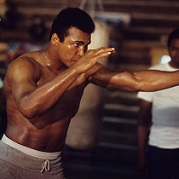 Another assumption of yore was that of all the boxers, Muhammad Ali was simply the best. Sure, he had a mouth as big as Donald Trump's, but Muhammad Ali was capable of proving his point -- a capacity Donald Trump, for all his money, cannot. And not only did Muhammad Ali have balls and skill in the ring. It was he who, when he converted to Islam and changed his name from Cassius Clay to Muhammad Ali, refused to be conscripted into the American military. He was stripped of his heavy-weight title for that action. Show me one other high-profile personality willing to take on the opprobrium attending on that action. Like it or lump it, he stuck to his guns.

Another bit of identity in my castle of personality, a personality that somehow seems stuck in a rut, is thia: I am unwilling or incapable of choosing a new fighter or a new religion to remortar the castle I seem to have built. Things empty out and there seems to be no substitute to arouse my presumptuous creativity. True, I like Manny Pacquiao for both his skill and his generosity but ... well ... it's harder to find the willingness to remortar the castle or rethread the tapestry, however strangely bereft and crotchety I may feel. Muhammad Ali is still the best ... end of story, end of discussion.

Where have the assumptions gone? Where has the personality got to? The adult in me is willing to acknowledge the springtime break-up of the Alaska ice flow, but the one once comforted and held whole rebels: Gregory Peck, the Vatican, Muhammad Ali ... I mean, that's the way things are, right? And if the answer to that is "wrong!" then there must be something to fill in, to replace and restrengthen the interstices of change. A newcomer. A substitute. A helium boost.

But of course there is no "must" about it. The 'adult' in me sees all that.

But I am far from being an adult.
Posted by genkaku at 8:19 AM