signs of the 'terrorist' times

The following picture and text was passed along to me in email. I'd be lying if I said I didn't smile.

But also I noticed how easily -- mentally or socially -- the American fear-engendering propaganda about so-called terrorism has seeped into a wider consciousness. There was a time when it was acceptable to joke casually about "niggers" and "Japs" and "red necks" as well. This transmission may just be a small silly, but it is a silly that grows out of a wider earth, for my money. It's just a whisper, perhaps, but still... Muslims branded as terrorists when, to my mind, the neo-conservative flag-wavers and Patriot Act believers are honest-to-God more frightening and terrorist-prone. 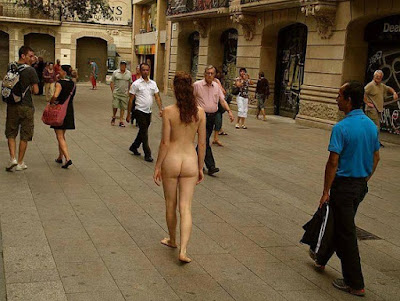 As you may already know, it is a sin for a Muslim male to see any woman other than his wife naked and if he does, he must commit suicide.


So on September 11th, at 10:00 A.M. Eastern Time, all American women are asked to walk out of their house completely naked to help weed out any neighborhood terrorists. Circling your block for one hour is recommended for this anti-terrorist effort. All patrioti c men are to position themselves in lawn chairs in front of their houses to demonstrate their support for the women and to prove that they are not Muslim terrorist sympathizers. Since Islam also does not approve of alcohol, a cold 6-pack at your side is further proof of your patriotism. The American government appreciates your efforts to root out terrorists and applauds your participation in this anti-terrorist activity.


P.S. If you don't share this, you're a terrorist-sympathizer,