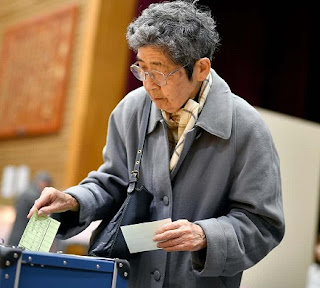 Japan’s prime minister, Shinzo Abe, has secured a strong mandate for his hard line against North Korea and room to push for revision of the country’s pacifist constitution after his party crushed untested opposition parties in Sunday’s general election.
Abe’s Liberal Democratic party (LDP) and its junior coalition partner Komeito were on course to win 311 seats, keeping its two-thirds “supermajority” in the 465-member lower house, an exit poll by TBS television showed. Some other broadcasters had the ruling bloc slightly below the two-thirds mark.

Who needs a pacifist constitution when there is so much need for a diversionary focus provided as the nuclear cleanup/fallout at Fukushima Daiichi continues to be so unrelentingly fucked up.

Does anyone else have the same whispering suspicion I have -- that in the nuclear chess game between Donald Trump and Kim Jong-un, I am glad to think that at least one party is relatively sane ... and I don't mean Trump?
Posted by genkaku at 10:32 AM