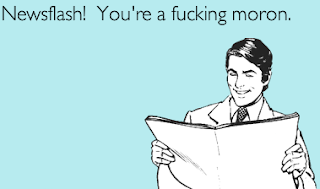 The observation came in the wake of a presentation of nuclear armaments around the world. The U.S. was/is miles ahead of anyone else, but Trump was apparently alarmed that the U.S. might be outgunned. Aides walked him back from his alarums.

Reading the news wires just now, I was struck by the number of stories that related to Trump and one or more of his improved bits of braggadocio. Story after story after story, often with a picture of the man who specializes in making bad-boy, attention-grabbing waves. Think back for a single year: Can anyone imagine the secretary of state's being caught out/quoted calling the president a "fucking moron?" Can anyone remember a time when circumspect -- and yes, often lie-laden -- language was the language of politicians and diplomats?

Everything has grown crass and, yes, stupider.

Now it's not just the forgotten who are caterwauling for attention. It seems to be everyone -- a majority where once it was a minority. Bit by bit by bit, whatever decency was aspired to, or even just lied about, is left like a candy wrapper in the gutter. News wires are awash with analyses suggesting this action or that puts Trump on the cusp -- the very cusp -- of political demise. But over and over again, that demise is not forthcoming. The moment I think of a new epithet to describe this foul and self-centered little man, I am outflanked by some new and improved bit of bullying, some new way of tearing down a country and its standing in the world, however fragile that standing may be.

The bad boys have created nothing of substance since Trump ascended the throne eight months ago. No laws. No policy. No statements of purpose that can last for more than a day or two. Health care, tax reform, infrastructure, jobs, environment .... The movers and shakers move and shake and nothing gets done outside hurting even those who adore the likes of Donald Trump. To the extent that top positions in the administration are filled -- and a lot are not -- they are filled with business men and military men and others who may be beholden to a commander in chief who sees them as the scowling pawns they seem to be. Quality candidates seem to be conspicuously missing.

It's exhausting and dispiriting.

I guess that will have to do since nothing seems to make much difference.
Posted by genkaku at 6:40 PM