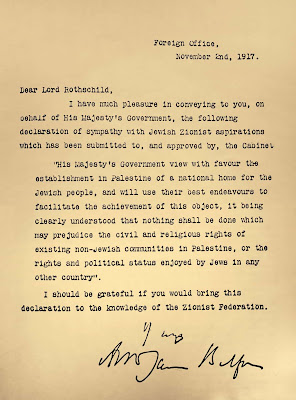 Where in London it's going to be held and who, precisely, will attend is a bit vague as yet, but on Nov. 2, a select group will sit down for dinner festivities marking the 100th anniversary of what came to be known as The Balfour Declaration -- England's backing, with provisos, of the state of Israel. Security will be tight and protesters will be kept at a distance.

I hesitate, based on my ignorance of history, to come out swinging too hard at the genie let out of this regal bottle, but I think it's fair to say that the Palestinians did not fare well under England's largesse. And it seems equally fair to suggest that Israeli Prime Minister Benjamin Netanyahu is not a man to let a political prop go unused.

Aside from anything else, I am astounded at the sweeping brevity -- all 67 words -- of the declaration.

Just because it's 20/20 hindsight doesn't mean that something doesn't suck.
Posted by genkaku at 6:00 PM