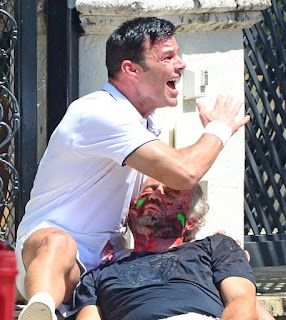 At the same time that U.S. congress members huddle in an attempt to fashion a tax bill that offers greater rewards to the wealthy indefinitely and pulls the rug out from under the less-well-to-do over ten years (and the bill feels like a win for Donald Trump and his ilk), "The World Inequality Report" helps to sharpen the grotesqueness of it all:


The richest 0.1% of the world’s population have increased their combined wealth by as much as the poorest 50% – or 3.8 billion people – since 1980, according to a report detailing the widening gap between the very rich and poor.
The World Inequality Report, published on Thursday by French economist Thomas Piketty, warned that inequality had ballooned to “extreme levels” in some countries and said the problem would only get worse unless governments took coordinated action to increase taxes and prevent tax avoidance....
The report warns that unless there is globally coordinated political action, the wealth gap will continue to grow. “The global top 1% income share could increase from nearly 20% today to more than 24% by 2050,” the report said. “In which case the global bottom 50% share could fall from 10% to less than 9%.”
However, the economists said increasing inequality was “not inevitable” if countries acted to bring in progressive income tax....
The authors said taxation alone was not enough to tackle the problem as the wealthy were best placed to avoid and evade tax, as shown by the recent Paradise Papers investigation. The report said a tenth of the world’s wealth was held in tax havens. [The Guardian]

What will it take to bitch-slap this ultra-wealthy segment of societies? I don't mean that as a mewling liberal rant. I mean it as a matter of practicality. The people who make the stuff that make rich people rich will only take so much and, in a line I repeatedly fall back on, "If you do not share your wealth with us, we will share our poverty with you."

I honestly cannot see the rich and savvy buttering their own bread with some common sense. They have the capacity, but the lack the sand. I honestly don't see an outcome that is spelled other than "b-l-o-o-d" ... the blood of your children. Yes, the peasants will be even harder hit, but in the end, your sons and daughters will be forfeit. Literally.
Posted by genkaku at 8:40 AM