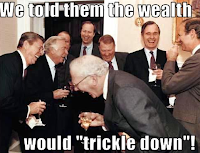 To hear The Guardian tell it, the Republican/Democrat tax plan wending its way through Congress (it currently seems to have the momentum for passage) bears an uncanny resemblance to a blueprint already implemented in Kansas. The thinly-veiled trickle-down economics that have failed analytical examination far and wide didn't work in Kansas and won't work in the broader U.S. Nevertheless, Congress seems kindly disposed towards this Kansas model.

Short and sweet: FUBAR ... fucked up beyond all recognition.


Is Donald Trump about to turn America into Kansas? It’s a question some worried people who live in the state are asking as the Republican party pushes through the biggest tax overhaul in a generation – an overhaul that, they claim, bears an uncanny resemblance to a tax plan that left their midwestern home in disarray.
After a failed economic experiment meant to boost economic growth blew a hole in the Kansas budget as big as a prairie sky (a $350m deficit in the current fiscal year and nearly $600m in the next) state jobs and services have been slashed....
The crisis follows the 2012 passage of a tax plan by Kansas governor Sam Brownback that he dubbed “the march to zero”.
Individual state income tax rates dropped from 6.4% to 4.9% – with the intention of getting rid of them altogether eventually. Taxes were eliminated on so-called pass through entities – businesses where taxes are collected at the rate of the business owner and not at the corporate rate. The plan would provide a “shot of adrenaline” to the Kansas economy, Brownback claimed.... “There never was a shot of adrenaline. If anything, that shot put the state on life support,” she said. “It’s the same thing that Trump is saying: there’s going to be tremendous job growth. Well, that didn’t happen either. It’s going to take an entire generation to undo this damage.”

Yes, the electorate has a short memory and yes, politicians know where their re-election bucks are likely to come from, so the bill will probably pass. But that doesn't mean it can't be seen for what it is -- an obscene flop for the nation.
Posted by genkaku at 7:41 AM