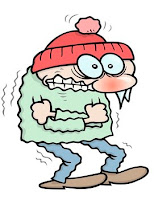 And yet it reminds me of a time when, at a school I attended in Lake Placid, N.Y., the kids fell out for skiing when it was 20 below zero. Skiing was part of the physical education regimen.

Twenty-below zero and I, like most of my friends, was not bellyaching because of the extreme cold but was pissed that the extreme cold meant the speed at which I could ski was measurably slowed. Without the rime of melted water that waxed the skis, we were all forced to go slower and, hell, that was no fun.

Now, of course, the bone-chilling gets the attention, not the fun. Strange to think of the implied 'heroism' contained in the notion that (wo)man battles the nature of which s/he is inescapably a part.
Posted by genkaku at 9:08 AM