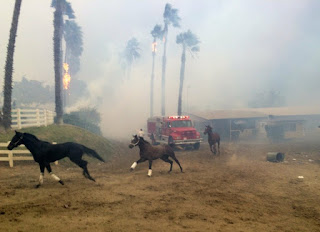 As the flames approached the elite San Luis Rey Downs training facility for thoroughbreds, many of the more than 450 horses were cut loose to prevent them from being trapped in their stables if barns caught fire, said Mac McBride of the Del Mar Thoroughbred Club.
Herds of horses galloped past flaming palm trees in their chaotic escape of a normally idyllic place. Not all survived.
Horse trainer Scott Hansen said he knows that some of his 30 horses at the facility died.
“I don’t know how many are living and how many are dead,” he said. “I guess I’ll have to figure that out in the morning.”

Sometimes I really do wish my logical serenities could convince my visceral outrages. But I fail and must concede it, as this morning when reading the story of the blast furnace wildfires savaging California and the pedigree horses cut loose against the encroaching flames. Like lightning, my mind pounced and yowled and wanted to blame-blame-blame. Dumb animals taken cavalierly into the care of well-coiffed owners are left to fend for themselves ... responsibility set aside because, hey, what the hell, you can't fight Mother Nature. Somehow, I am sick of it and angry. Furious as a California ember.

Everything seems to be a mess and getting messier and the horses, which, left to their own devices, would naturally have fled, are constrained by a tony set who 'love' their animals but fail to demonstrate a substantive and responsible love.

Fire, like food and air and water, is serious. It burns the well-heeled and the impoverished alike. Isn't it enough to cope with what cannot be escaped and stop manufacturing situations that are awarded a focal concern? Hurricanes strike in the Gulf of Mexico ... the devastation is terrific. Police shootings of unarmed black men waxes. Some blacks plan to skip the opening of an African-American museum in Mississippi after the nation's highest office-holder says he will attend the opening. Donald Trump declares Jerusalem the capital of Israel. Artworks by some of Guantanamo Bay's 41 prisoners, some held without trial for over 10 years by the 'democratic' United States, are under threat of confiscation and/or destruction because of a display at New York's John Jay College. Minnesota Sen Al Franken becomes a recent casualty in the endless line of flabby, aging men in power stepping down in the wake of sexually-inappropriate activity years ago. The sex tsunami has political operatives on edge ... but neither Republicans nor Democrats have any functional plan for addressing it outside figuring that they'd best stick with the donors who will pay for them to be re-elected. Donald Trump promised to "drain the [Washington] swamp." He, as a man who has never conceived a policy or appointee he couldn't back away from, is refilling it.

As hoped by the pre-election Trump constituency, their knight in shining armor is shaking the trees. Their anger and frustration is being addressed (though not with the jobs or Mexico wall or dismantling and replacement of health care as promised during his campaign) ... and in the process has managed to encourage the rest of us to shut away a capacity for decency and caring and more-or-less truthfulness ... and concern with the country as a whole. I am sick of feeling on edge and held in thrall, via a largely compliant press, to an idiot and coward and bully. I'm sick of it and simultaneously sick of my own sissy righteousness that can do little better than point and whine and sneer.

When was the last time some action addressed the things that cannot be escaped and stopped creating stuff that then needs to be escaped? I am sorry that people are hurt ... in California, in Puerto Rico, in wherever. I am sorry that horses had to die. But within it all, I am sick of feeling sorry and on edge.

And somehow, the horses of California rose up in my throat this morning. Perhaps those horses could be put to good use, Donald ... 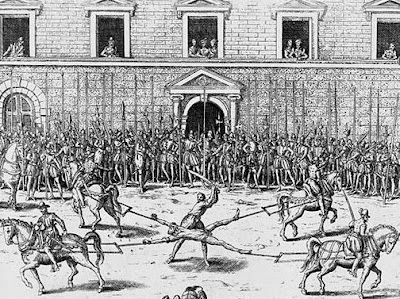 What a frustrated little twerp I am.