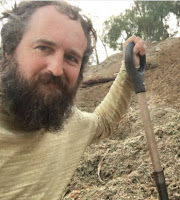 The man who allegedly sent a box of horse manure to Treasury Secretary Steven Mnuchin in reaction to Donald Trump's recently-passed tax legislation, feels that protest needs a bit of a smile: "Protest really should be funny,” [psychologist Robert] Strong told Reuters. “People’s eyes glaze over when they just see angry people in the streets.”

(Reuters) - A man claiming to be the person who delivered a gift-wrapped package of horse manure at the Los Angeles home of U.S. Treasury Secretary Steven Mnuchin said on Monday he did it to protest the federal tax overhaul signed into law last week by President Donald Trump....

In a photo of the card Strong posted on Twitter, he wrote “Misters Mnuchin & Trump, We’re returning the ‘gift’ of the Christmas tax bill” and signed it “Warmest wishes, The American people."

I agree with Strong's observation about humor and would be happy to sign the card as written.
Posted by genkaku at 11:14 AM