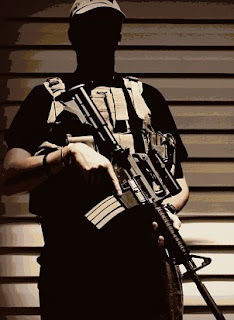 It's not just the Americans who employ mercenaries  (example article) to do the fighting in the Mideast that for one reason or another is kept 'off the books' so to speak. Russia and the United States appear to be on the same mercenary page for largely the same reasons:


When [Russian President Vladimir] Putin went to a Russian air base in Syria on Monday and told Russian troops that “you are coming back home with victory,” he did not mention the private contractors. Russian troops are expected to remain in Syria for years while the contractors are likely to stay to guard lucrative oil and gas fields under a contract between the Syrian government and another Russian company allegedly linked to a businessman known as “Putin’s chef” for his close ties to the Kremlin.
Proxy fighters like Slyshkin have played a key role in Syria. In addition to augmenting troops officially sent by Moscow, their secret deployment has helped keep the official Russian death toll low as Putin seeks re-election next year.

Russia and the United States, allies in war. It seems that leadership in both countries does not want to be blamed for sending troops to die -- the pesky electorate is touchy about seeing its sons and daughters killed, especially in an election year that Putin faces and American policy makers can envisage all too clearly. The American military is short-handed and 'contractors' help to fill in the gap where policy makers lack the integrity to declare a shooting war. Those congress men and women sure as hell don't want their kids shanghaied by the blood-and-bullets crowd.

Objectives seems to vary mildly (the U.S. wants bases and oil; Russia wants access to a warm-water entrance and exit to the world) but whatever the longings, mercenaries seem to fill the bill. No need to record the depressing dead-and-wounded statistics in the national military column. It's just... uhhh... "contractors" dontcha know.

Oh well, I am late to this particular party: Here is an article that's a couple of years old and probably much better thought out.