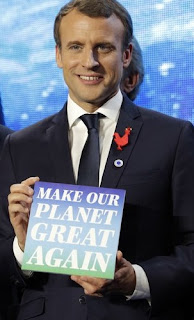 It's as if (had we missed it on the first go-round) Donald Trump is inviting us all to "Make America Dumb Again."


PARIS (AP) — It is a dream come true for U.S.-based climate scientists — the offer of all-expenses-paid life in France to advance their research in Europe instead of in the United States under climate skeptic President Donald Trump, two of the winners say.
American scientist Camille Parmesan and British scientist Benjamin Sanderson are among the 18 initial winners, including 13 based in the U.S., of French President Emmanuel Macron’s “Make Our Planet Great Again” climate grants.
Macron congratulated the winners during a brief ceremony in Paris on Monday evening, ahead of a climate summit that gathers more than 50 world leaders in the French capital Tuesday.