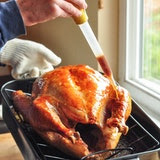 On occasion, it seems strange to be made aware that whatever my current concerns might be, however serious or solemn or just plain silly, someone, somewhere else is busy on another of life's tangents and their efforts impact my tapestry without notification.

So, for example, at a time when I might be basting a turkey, the Roman Catholic pope is disturbed by the translation of The Lord's Prayer, one of the best known of Christian petitions.


Pope Francis has signalled his approval of moves already under way in the Catholic church to change the line in the English version of the Lord’s Prayer, from “Lead us not into temptation” to “Don’t let me fall into temptation”. Noting that it was a bad translation, Pope Francis said: “It’s Satan who leads us into temptation”, adding, as though studying a health-and-safety leaflet, “that’s his department.”

OK, language is like folk music -- always being retuned and reworded and messed with according to who is appreciating or using it. But when one of my bedrock memorizations (who the hell knows where I learned the Lord's Prayer, but in my Christian society, I know it) gets tweaked, something within rebels.

It was the same when the United States added "under God" to the Pledge of Allegiance in 1954 -- another time (the McCarthy hearings) of alleged heightened morality.


In 1954, at President Dwight D. Eisenhower's urging, the Congress legislated that “under God” be added, making the pledge read: I pledge allegiance to the flag of the United States of America and to the Republic for which it stands, one nation under God, indivisible, with liberty and justice for all.

It was weird, adding "under God." Wasn't "one nation, indivisible" enough of a prayer/hope/aspiration/goal? Even as a teenager filled to the brim with his discovery of yet another adult persuasion that was hypocritical, I didn't object so much to "God" as I did to the ways in which the addition messed with the lilt and rhythm of what I had learned as a child.

And it's somewhat the same with the pope's pointing out that Satan is the bad guy, not God, when he revises the Lord's Prayer. It's a song I know, but I know it my way, even if I seldom if ever make use of it.

But nowadays, I'm tickled at my own insistence. Here I am basting a hypothetical turkey and the pope is messing with one of my small foundational rocks in ways that show off how distant we are from what we consider the important things in life.

I wonder if I could get Satan to baste my turkey, assuming I ever make one ... create a kind of unifying gesture to the universe around me.

Also I wonder why the pope did not go further and explain the invisible demarcation line between God and Satan. Wouldn't that seem logical and kindly to those being asking to partake at the Christian dinner table? Without a little spice, wouldn't God be bored stupid?