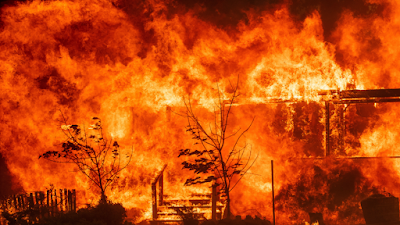 The world, as it seems (or is it just my slip-slidin' away?), is every bit as on fire as the raging infernos in hell-bent California. Even the morally-imbalanced Donald Trump has acknowledged the severity of California's plight -- or is it the donors who live there -- with a promise of federal largesse that Puerto Rico still badly needs after a 2017 hurricane that "caused the worst electrical blackout in U.S. history.... In June 2018, thousands of homes and businesses were still without power."

In the surrounding environment, the U.S., with Trump's help, has begun backing out of the nuclear deal struck with Iran -- reimposing sanctions on a country with an economy the size of Maryland's. No doubt Israel's storm troopers are dancing in the streets: Iran does not recognize Israel's right to exist (Israel neglects to mention that it's own policies are much the same as regards Iran and its policies towards Palestinians and other not-quite-Jewish-enough Middle Eastern natives underscore the point), to hear Israel tell the tale. Anyway, if the U.S. pressures Iran, so much the better from Israel's peace-skittish leadership point of view.

There are abusive-sex stories aplenty with Hollywood and business executives and politicians stepping down and going home at even a hint of scandal in their past (usually several decades ago). "Predator" is a word that has lost its impact.

Someone suggests teachers and perhaps students should go armed, given the school and night-club shootings that everyone is horrified about ... for maybe 15 minutes. Charter schools make headway in a push to 'monetize' what was once a free public education.

The fires lick my heals and I am too damned tired to look it up and cite it chapter and verse. Just put me in the crabby cuss column.

Who knows, perhaps every one will segue -- faute de mieux -- back to morality of some sort.... burn the whole house down -- is that the message? Perhaps, minus the Zen fist-pumping, it is.