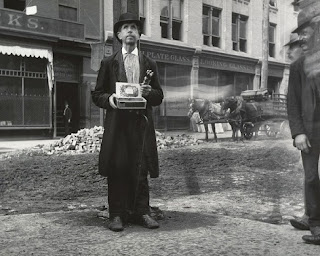 The unwillingness/inability of the well-to-do, many with excellent educational backgrounds, to examine their own station and accumulations has always marveled me a bit. How could the well-heeled not wonder and probe the universe in which they found themselves? True, the age of "noblesse oblige" can be tiring, but still, isn't anyone curious or must they all ignore a capacity to think back on the foundations of wealth and privilege... and the costs attendant on those attributes? On whose shack is this chateau constructed?

Well educated? Are there no Eleanor Roosevelt's willing to test the down-trodden tenements that Jacob Riis photographed in the late 1800's? Personal visits tell telling tales and when such tales are refused as indigestible of distasteful by those with a preferred education, must every disparity build up its pressure and eventually allow a Somali security officer to assess why there were pirates who took oil shipments hostage off the shores of his country: "If you do not share your wealth with us, we will share our poverty with you."

Well educated? Must there always be blood before the well-educated get the message ... if in fact even blood can accomplish the delivery. Donald Trump managed to get five military deferments, and he's rich and, to hear him tell it, he deserves every penny, even if the contractors who work for him got stiffed. Their deferments do not twinkle like baubles on a Christmas tree. Let them be drafted.

Well-educated? Was there a reason that Henry Ford astounded the industrial giants of his day by doubling the minimum wage for his auto workers in 1914... from about $2.50 to $5.00 per day? True, Ford's was a business strategy rather than big-hearted largesse, but isn't business strategy part of what the well-educated get trained for? A better-heeled middle class was in a better position to buy more of what Ford had to sell and he was more likely to retain workers who might otherwise amble away from the production line.

In earlier times, money was not discussed in well-to-do venues/households. Of course the well-to-do had money. It was the way of the world. My mother was brought up in a wealthy Cincinnati household that drove her nuts (love of money often shoulders aside a need for love). She told me once that the only reason she knew there was a depression (as in The Depression) was that they lost an upstairs maid. Nobody genteel discussed money and yet the rule then was the same as the rule now: No one who got rich ever did so by being nice.

Mostly, the rich get away with it -- are able to grab Dame Wealth by the pussy as Donald Trump managed to do with a passing female -- because someone else needs to eat or shelter a family. But then the disparities start to inflate the resentment balloon. Trickle-down economics don't work today any better than they did yesterday. A good education is what benefits the wielder of that power, but the gouging hurts. And sometimes hurts so badly that, as in the past, blood must flow. Wouldn't you think a good education would teach you that?

In Östersund, Sweden, in 1918, the effects of the "Spanish flu" epidemic that would claim somewhere between 50 and 100 million lives worldwide, was hastened and exposed by the wealth disparity apparent in its environs. A poster of the time read, “Tourists out of our buildings in times of crisis. Butter, milk and potatoes for workers!” Those who came to Östersund for its hunting and fishing allure were outlandishly contrasted with those who slept in shacks, had little or nothing to eat, and could not find work. Close quarters were known to hasten to spread of the disease, but a choice between close quarters and no quarters was thin to non-existent. A local newspaper Östersunds-Posten asked rhetorically: “Who would have thought that in our fine city there could be such awful destitution?”

Soldiers poured into town in an effort to be prepared for the war that was gathering steam to the south. Presumably, they brought with them the germs others wished to escape. (Woodrow Wilson, the American president, was told of the virulence of the disease in close quarters and nonetheless ordered American soldiers shoe-horned into troop ships bound for the European front. No need to mention the disease. ("Influenza and pneumonia killed more American soldiers and sailors during the war than did enemy weapons.")

The backlash in Östersund may or may not have contributed to Sweden's growth as a 'welfare' state, but the reflection and reconfiguring of political (read money) institutions is worth noting. "Fool me once, shame on you. Fool me twice, shame on me."

Wouldn't you like to know where those humming-birds' tongues came from?
Posted by genkaku at 12:54 PM