That suspicion in the back of your mind finds some vindication. 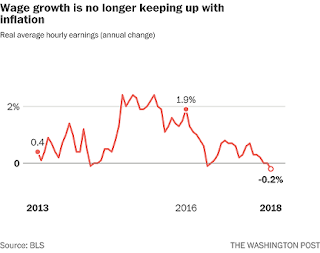 U.S. workers' paychecks are worth less than they were a year ago, the Labor Department reported Friday, as modest wage gains have failed to keep pace with inflation.
Inflation rose 2.9 percent from July 2017 to July 2018, the department reported, while average hourly pay increased 2.7 percent over the same period.
The lack of real wage gains comes despite a strong economy, with sustained growth and an unemployment rate of 3.9 percent — one of the lowest levels in decades.

Maybe the 'takeaway,' as millennial-speak puts it, is that "when you feel as if you are getting fucked, it probably is because you are."