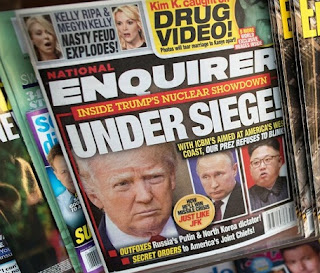 
WASHINGTON (AP) — The National Enquirer has long explained its support for Donald Trump as a business decision based on the president’s popularity among its readers. But private financial documents and circulation figures obtained by The Associated Press show that the tabloid’s business was declining even as it published stories attacking Trump’s political foes and, prosecutors claim, helped suppress stories about his alleged sexual affairs.
The Enquirer’s privately held parent company, American Media Inc., lost $72 million for the year ending in March, the records obtained by the AP show. And despite AMI chairman David Pecker’s claims that the Enquirer’s heavy focus on Trump sells magazines, the documents show that the Enquirer’s average weekly circulation fell by 18 percent to 265,000 in its 2018 fiscal year from the same period the year before — the greatest percentage loss of any AMI-owned publication. The slide follows the Enquirer’s 15 percent circulation loss for the previous 12 months, a span that included the presidential election.

Somewhere, in the midst of this story and the loss of circulation, the question arises in my mind as to whether Trump supporters are really not quite as stupid as the liberal left would like to believe. Is there a limited amount of bullshit even Trump's core constituency is willing to swallow? Maybe, of course, it's just be that no one likes to read much any more and therefore Enquirer readership is bound to tumble ... together with a willingness to consume "Moby Dick" or William Shakespeare. But maybe watching the "fake news" segue into bastions of right-wing support is just too big a pill to swallow and people are voting with the wallets.

J. Edgar Hoover, the longtime head of the Federal Bureau of Investigation, was once said to have served his 48 years at the helm by being privy to so many of the dirty little secrets that the eight (seven?) presidents he served under did not want made public. Hoover knew where the embarrassing bodies were buried... and he liked his éminence grise job. If he were to spill the beans.... Well, he didn't and he kept his job.

Now the secrets have been transferred from the quasi-august FBI to a safe maintained by the National Enquirer and its family. This may seem poetically consonant with a Donald Trump presidency, but when then entire meaning of a word like "scandal" has lost its ooomph and everyone has his nose up someone else's ass, perhaps even the National Enquirer must take its lumps.

Oh well, just looking for a little sunshine on yet another cloudy day.
Posted by genkaku at 9:32 AM