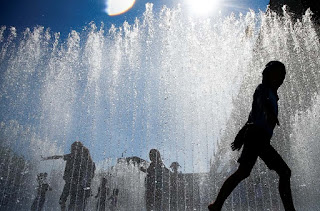 
Summer weather patterns are increasingly likely to stall in Europe, North America and parts of Asia, according to a new climate study that explains why Arctic warming is making heatwaves elsewhere more persistent and dangerous.
Rising temperatures in the Arctic have slowed the circulation of the jet stream and other giant planetary winds, says the paper, which means high and low pressure fronts are getting stuck and weather is less able to moderate itself.
The authors of the research, published in Nature Communications on Monday, warn this could lead to “very extreme extremes” ....

Having just passed through a week and a half of gushing and seemingly immovable humidity that flattens me out, I guess it's understandable that I should read the article and remember, as he will no doubt remind me, that it's not Donald Trump's fault: Nothing ever is.