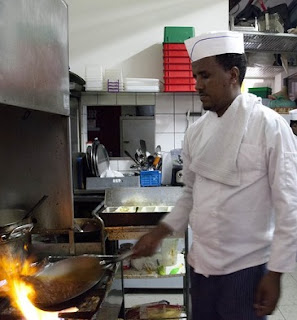 Kind of reminds you of treatment reserved for Palestinians:


TEL AVIV, Israel (AP) — African migrants in Israel have been detained, threatened with deportation and faced hostility from lawmakers and residents. Since last year, they face another burden: a de facto 20 percent salary cut that has driven them further into poverty.
Israel’s roughly 35,000 African migrants and the groups that support them say the recent law — in which Israel withholds the money from their paychecks every month and returns it only if they leave the country — is yet another attempt by an anti-migrant government to force them out....
While the migrants say they are refugees fleeing conflict or persecution, Israel views them as job-seekers who threaten the Jewish character of the state.

The "Jewish character of the state" ... is that anything like the Aryan character of Germany in the run-up to World War II? Immigration is a tough enough nut to crack without inserting apartheid into it ... or Chartlottesville ... or whatever.