the Vatican and the clusterfuck 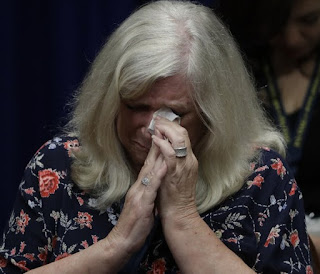 The in-box had a couple of look-at-this-links to stories about an unveiled grand jury report in Pennsylvania that said at least 300 Roman Catholic priests had molested more than 1,000 children since the 1940's.

Since I have traveled that circuit in one form or another, I guess I should take note, grimace anew, and say I am not terribly sorry for the Roman Catholic institution that fostered a wealth-gathering celibacy credo at the expense of all those demonstrably-stiff  peckers out there.

It's an ugly matter that hurt many people. "Vile" hardly covers it. But the notion that the clerical diddling of little boys and little girls stretches back only to the 1940's ... well, it's crap. Try 300 AD and environs. And if it goes back that far, it's a good bet that's not far enough.

True, the feeding-frenzy is currently afoot with the release of the Pennsylvania report, but that will, if history is any guide, lapse into forgetfulness. More informative, for my money, is the laundry list of Roman Catholic awareness compiled by Patrick Wall et al. It addresses the questions of what the Vatican knew and when it knew it.


Systemic rot. Who will confess forthrightly? No more yes-but bullshit. Will there be "closure" and "healing" and other such oleaginous rejoinders? Sure, but getting the cards on the table after years of loneliness and pain and smug, ecclesiastical legerdemain ... maybe it's a baby step of sorts.
Posted by genkaku at 11:06 AM