married, then and now and then 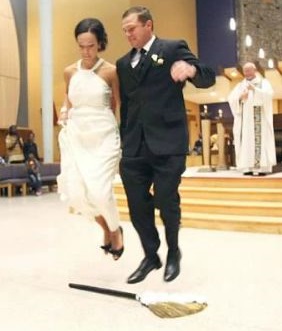 Once upon a time, belief nudged the tradition of "jumping over the broom" as a signifier of a newly-married couple. Then the church got involved and the blessing of the occasion was transferred to those whose bells peeled. If you believed it, then it must be so, right?

Now, in Scotland, a return to earlier and less credulous roots appears to be on the rise.


For the first time last year, in what was once a famously religious country, the Humanist Society of Scotland married more people than the Church of Scotland....
Scotland categorises humanist weddings as a non-religious belief ceremony, with the same legal status as church-based and civil marriages. Humanists include atheists and agnostics, and those who say they are spiritual but who dislike organised religion. They embrace same-sex marriage, too, unlike most mainstream churches.
And since 2005 they have mushroomed: in 2017, there were 5,912 humanist weddings with 3,283 conducted by Humanist Society celebrants compared with just 3,166 by the Church of Scotland.

It's not that belief has been excised from what is sometimes called "marital bliss." Rather, it seems that a willingness to give to another what rightfully belongs to individuals has lost its savor. What right has someone or something else to give an imprimatur of legitimacy or worth in your personal business? The answer is, only the right any individual might transmit to such an institution or focal point.

It sort of reminds me of the old puzzler, "What if they had a war and no one showed up?" Is anyone the less married or the less committed without the intervention of some other party, ecclesiastical or otherwise?

Rituals are kind of nice. And certainly a party is a nice thing. You don't have to believe it unless you choose to. Otherwise, jump over the broomstick and check out the snacks.

The church is dismayed, and for good reason ... what if they had a religion and nobody came? No need to wax vitriolic about it. No need to condemn or scoff. Everyone insists on believing something and religion is another flower in the garden. Pick it or leave it alone ... your pick.

I can imagine members of the exceptionally lucrative marital industry muttering in a secluded corner, "Don't have a cow!" On the other hand, maybe having a cow is precisely the right reaction as the rug under your feet is removed.

Like a dollar bill, the wedding industry requires belief.

Or, as the Dhammapada puts it, more or less, "Better your own truth/ However weak/ Than the truth of another/ However noble."
Posted by genkaku at 11:01 AM