"The speed of death." 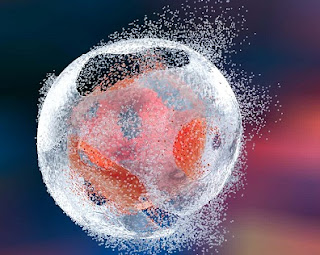 Name: The speed of death.
Age: Not sure that is entirely relevant.
Appearance: Cellular.
You’re talking in riddles. I’m bracing myself for some seriously hard science.
Stop beating about the bush and get on with it. OK, here goes. Two Stanford University systems biologists, Xianrui Cheng and James Ferrell, have discovered the speed at which cells die.
What is a systems biologist? A biologist who is good at maths, but you are missing the bigger picture.
What is the bigger picture? If we know the speed at which cells die and, more to the point, the way in which they die, we can do amazing things.

Not quite sure what it's all about, but since death in all its myriad facets is often taken seriously (solemnly?), apoptosis always gets my dwindling attention.