Finally, the French have acknowledged the "French kiss" with an addition to the dictionary. 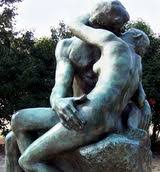 The slang verb "galocher" found a rightful home in the "Petit Robert" dictionary today... a somewhat delayed entry as it may seem to those who credit the French with amorous dispositions.

Up until now, there had never been a specific French word for the activity, according to Laurence Laport who works at the publishing house.

"The word expert added a caveat about the power of language. The lack of a specific term 'never stopped us from doing it.'"