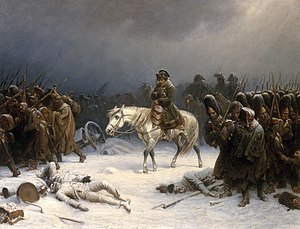 I doubt that Napoleon was swaggering when the Russian winter made Moscow unattainable in 1812. Napoleon retreated: Pretty much anyone knows what that feels like.

Whether little or large, "retreat" is a label to elude if possible and to shoulder with good grace if not. No one ever set out on a particular course in order not to achieve a particular goal.

So ... determination is an important quality, whatever the endeavor. "Damn the torpedoes and full speed ahead!" Painting a picture, spiritual discipline, invading Russia, making money, learning to roller skate, collecting coins, getting married ... there's a time to stop shilly-shallying and ... go for it. Balls-out, all-in, pedal-to-the-metal ... no retreat.

And all of this makes some sense in ordinary terms. A life without commitment is pretty thin tea... 'do-able' perhaps, but still, pretty thin.

But beyond all that -- once the habit has been tucked under the belt -- perhaps there is another view of "retreat" that is warranted, another, more useful habit to tuck under the belt.

A man leaves his house after deciding to walk downtown on this sunny day. He wants to buy some shoe laces. Part way there, he realizes he has forgotten his wallet and has to turn back, to retreat. The footsteps that led forward now lead back. He may cuss himself out briefly for 'wasting' his energies, but then he settles down and gets on with it. He is walking back ... and yet there is, in reality, no direction he can walk that is not straight ahead. Cussing and grumbling may be part of the territory, but straight ahead is the reality. Always straight ahead. It's not as if there were something he could do about it. He can call it a retreat or he can call it an advance, but still, the reality is in his face ... straight ahead.

And the habit under consideration lies precisely here, in what cannot be escaped ... this moment, this straight ahead. Where there is, in reality, no retreat possible, basing an outlook on "retreat" or "advance" is shaky ground indeed. No need to wax philosophical or spiritual about it, no need to prattle about "living in the moment" when anyone with two brain cells to rub together already knows that living in the moment offers no other option. "No retreat" is not some generalissimo's call to glory. It is just what cannot possibly be avoided... or embraced either.

Still, it takes some courage and it takes some practice to do what anyone cannot help but do. "Advance" and "retreat" are intellectually OK, perhaps, but these are secondary matters when it comes to moving straight ahead. No-retreat is not a choice, it is a simple statement of inescapable fact. And it's a good idea to get comfortable with what is inescapable.

In an effort to avoid the use of the word "retreat," military men would sometimes refer wryly to their movements as "advancing to the rear." Which of us has not, at one time or another, been equally wry?

But I think it is a topic worth examining.

Intellectually it may compute.