As if from some free-floating iceberg in the Atlantic, chunks and bits and pieces of memory slip silently or with some Homeric splash into the silky and embracing deep. 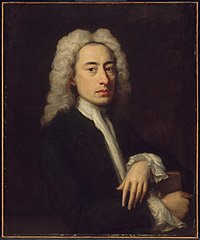 to recall any of his significant works. Once I could rattle them off like colors of the rainbow. Does it matter? I hardly know anyone any more who knows or cares who Alexander Pope was and his stylized, scalpel-sharp presentations that both skewered and adored the beau monde fit poorly if at all with the world of Twitter and Facebook. Still, he was once a stilletto of strong white ice in my mind (at once a Titan of the intellect and a sissified, crabby intellectual) and whether anyone else knows him or not does not bother me so much as losing touch with this old bit of information that clung and gave substance to the whole.

The old chestnut that sprang up, minus a surrounding environment that once existed, was:

A little learning is a dangerous thing;
drink deep, or taste not the Pierian spring:
There shallow draughts intoxicate the brain,
and drinking largely sobers us again.

Strange to think how far from home anyone might travel in search of wisdom and worldliness. Lake Victoria, the Gobi, the Taj Mahal, Tierra del Fuego, the land of the Jabberwock .... Travel and travail ... when all the time, if the eyes had been somehow wider, the information was no further away than a pinkie either culturally or personally. Pick a point, any point, and, with diligence and courage and love, home is not so far away after all.