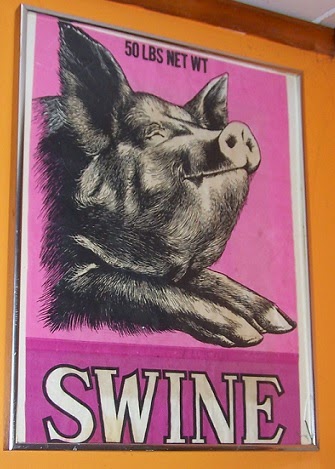 Overnight, the weather seemed to loose its chilling grip so that, by 5:30, the temperature has been reported at 15 degrees warmer than it was at the same time yesterday: 32 degrees today and I could feel the warmth as I sipped wake-up coffee on the porch.

Small things of the past floated into view as I woke up, turned lights on and shuffled over to fire up the computer. Small matters that brought a smile to my interior lips but would be unlikely to delight anyone else:

-- Hanging on the wall over the computer is a framed label from a meat packing house: "SWINE" is written beneath an etched picture of a pig, which may or may not be described as smiling. The label was a present from an old and now-dead friend, Bill McKechnie III -- a guy with whom I enjoyed the quirky and whimsical matters in life. He knew I'd like it and he was right.

Besides the picture itself, I like to know that I know the word "swine." Somehow "swine" is delicious, sort of like "shit!" or "varlet." A "varlet" is defined on an Internet dictionary as "an old word meaning a 'dishonest man.'"

Old words suit me better than sincere words like "moving forward" or questions whose answers begin with the word "so" -- both of them trendy these days. "Swine" and "shit!" and "varlet" have meat on a bone I find tasty. Like family, they go generally unnoticed until, like this morning, their pleasing qualities assert themselves for a moment and then are gone again.

-- When it comes to the upcoming 'lung cancer operation,' I remembered together with the "swine" of the past and present a horoscope prediction I once received outside the Metropolitan Museum of Art in New York City.

It was a sunny day and the museums be-fountained front sidewalk was littered with strollers and small-bore hawkers and, like me, people-watchers. Among other things, I was always fascinated by the very-small children being pushed in carriages. They looked here and looked there and had the attention span of a drug addict ... their eyes gorged themselves briefly and with an indifference that might have been sensible or might have been born of ignorance. But when they were strolled past the fountains, they became fixated. Their eyes did not shift to some new topic. They stared and stared ... what was that about? I didn't know but the question was tantalizing.

Tucked into the passing crowd, was a nut-brown man offering to do horoscopes for $10. He sat on a chair, another empty chair accompanying him and his sign. I was interested, but not $10 worth of interested. Finally his voice reached out to me, offering to do a reading for $5. I sat down in his chair.

He looked up my birth-time-date-place in (I think it's called) "The Ephemera," a book telling the positions of stars and planets in earlier times. And then he began his sketch of my life. He told me I would meet my future wife near to home: I met her in a shop 100 yards from my apartment. He told me other things as well, including my life span. When he finished, I asked him about spiritual adventure, which, at the time, I was heavily immersed in. He looked at me and laughed as if I were a foolish child. "Oh," he said between chortles, "Enlightenment in this lifetime. No doubt about it. No doubt about it." I figured he had a very flimsy appreciation of "enlightenment" and set it aside, though I admit some part of me was under-the-Christmas-tree pleased.

But there was the matter of when I was going to die: "83 to 85" he said without solemnity. I figured, based on actuarial tables of male deaths, that this was a pretty good guess, one he might have gotten from actuarial tables. But there was a soupçon of doubt: Perhaps he was working from some other basis of knowing, one not dependent of actuarial tables. I had paid $5 for this sort of half-credited ooooeeeeooo and I was getting it.

The point of all this recollection was its link to the upcoming operation. Whimsically, it occurred to me that if 83-85 was my shut-down time, was there really a reason to take painful steps towards preserving or life-extending? If I were younger, perhaps I would not ask such a question, but, at 74, when the imagined or real deadline is within spitting distance ... well, what's gained from an operation on balance? A chance to live longer? Longer than what? Longer for what? I like my comforts as well as the next fellow and would dislike being hospitalized or as a friend puts it, "drugged to the tits," but is this actually an activity for something or is it merely another means of preventing something else ... something like life, for example?

All of this, at a lesser length, came along this morning on the wings of a whimsy. In the same travel kit as "swine." Who knows -- maybe all of this is just some sexy denial process and when the actual factuality of death comes along, I will be desperate for some mystical or medical magic. But that time is not now.

Just now I am gently pleased to be among the swine and varlets and the ability to exclaim, "oh shit!"