Sometimes the moral posturing just runs off the road map from where I sit.

President Barack Obama confirmed Kassig's slaying after a U.S. review of the video, which also showed the mass beheadings of a dozen Syrian soldiers.
The 26-year-old Kassig, who founded an aid group to help Syrians caught in their country's brutal civil war, "was taken from us in an act of pure evil by a terrorist group that the world rightly associates with inhumanity," Obama said in a statement. 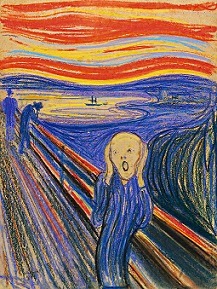 Politically, Obama's statement may be understandable: Who wouldn't cringe at such a deliberate and grisly demise? Who would not weep for the victim or his family? Who would not SCREAM about the circumstances that promote such atrocities?

What person claiming to be a human being would not give anything to undo what has already been done? The answer to that question is, plenty of people, up to and including the president who claims a high moral ground and talks the human talk while sidestepping the human walk, however hard and complex.

The Judas Iscariot vision is hardly limited to the president. The beheading of Peter Kassig is horrific. The beheading of a dozen Syrians is an aside: They weren't Americans -- you know, the ones building up and committing armed attacks in the Middle East. Americans, the ones who made the word "terrorism" the lingua Franca of world leaders everywhere. "Terrorism" -- what a great way to con people into allowing "pure evil" as those in power seek to silence and subjugate those who do not agree with them.

Oh well, I could go on and on about the terrorists who decry terror. It's just that the unexamined use of "pure evil" ... well, what a nice bit of evil to add to the traitorous mix.
Posted by genkaku at 8:18 AM