a reality check for Netanyahu and the U.S. 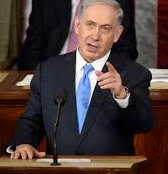 On an election tour, Benjamin Netanyahu came to the United States last week and pissed off U.S. President Barack Obama by addressing a joint session of Congress. He was adamantly opposed to any agreement between the U.S. and Iran in the matter of (potential) nuclear weapons (which Isreal has in reality). For nuclear-armed Israel, Iran is an enemy ... and who in the U.S. Congress would dare to question Israel's assertions? These are guys and gals who, like Netanyahu, want to get re-elected.

Anyway, Al-Jazeera raises some interesting questions when it comes to the facts surrounding Netanyahu's assertions.
Posted by genkaku at 11:49 AM