(Reuters) - A Russian lawyer for Edward Snowden said on Tuesday the fugitive former U.S. spy agency contractor who leaked details of the government's mass surveillance programs was working with American and German lawyers to return home.
In Washington, U.S. officials said they would welcome Snowden's return to the United States but he would have to face criminal charges which have been filed against him. 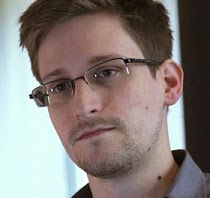 I can hardly imagine he would return without some written guarantee that he could defend himself against the book the United States would be constrained to throw at him. And such a defense would unveil too much of what the U.S. would prefer to keep secret ... for 'national security' reasons.

Still, it must be lonely in Russia. The initial furor of Snowden's revelations has dropped away. Does he or does the U.S. government want to pick at the imperfect scab that has grown over that wound?
Posted by genkaku at 5:57 AM