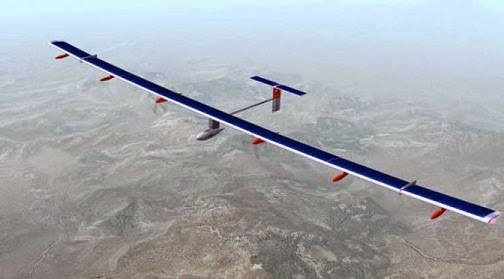 To mark my 75th birthday, of course, a solar plane took off today from Abu Dhabi, UAE, in an attempt to fly around the world unaided by fossil fuels. The flight, like the birthday, would be a "first." Likewise it is an experiment whose outcome cannot be known.

Of each, I wonder, "How the hell did that happen?!"

As if to keep things in perspective, the U.S. et al attacked an oil refinery held by Islamic State in Syria. Islamic State, a high-profile enemy-du-jour for the U.S., funds some of its military operations through oil sales in subjugated territory as it marches towards an imagined "caliphate" in the Middle East.

Oh yes, and by the way -- one less oil refinery not only dents Islamic State's income but also means that the over-supply of gasoline that has depressed U.S. prices at the pump, will be 'threatened' and consumers can expect to see prices rise up anew. Oil companies that have laid workers off may be seeing a light at the end of a constricting economic tunnel. Thank God! -- isn't it worth killing a few people if the profit margin is enhanced?! Gas prices in the U.S. are expected to average $2.33 per gallon in 2015 after ranging above $3 per gallon in 2013.

War-for-profit -- the same-ol'-same-ol'  my nation continues to stoop to, in much the same way I have stooped to the passage of time.

And today is the first full day of Daylight Saving Time ... a resetting of clocks to one hour ahead of what they were at the same time the day before. Hence, an hour has been magically "lost" and profit is marginally boosted.

Sorta like birthdays -- you leap ahead only to find yourself strangely at a loss.