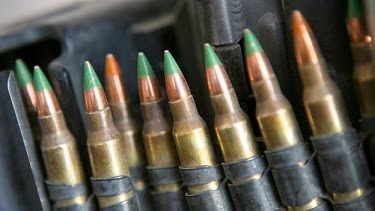 OK -- say you are out in the woods during hunting season and suddenly you spy a 12-point buck wearing a flak jacket. You've got a clean shot but ... how the hell are you supposed to bring him down without armor-piercing bullets?

Well, luckily or otherwise, a proposed ban on some types of armor-piercing bullets was riddled to death after more than 50 U.S. senators fronted the objections of Second Amendment (the right to bear arms) enthusiasts.


"If law-abiding gun owners cannot obtain rifle ammunition, or face substantial difficulty in finding ammunition available and at reasonable prices because government entities are banning such ammunition, then the Second Amendment is at risk," the senators said in the letter.

Much as I might wish my country were as civilized as Great Britain, where gun ownership and use is curtailed and even most the cops don't wear guns, still, there are 90 guns for every 100 residents in this land of 319 million, so the chances of civilization are unlikely-to-none, I figure.

But worse than being slightly dispirited by this observation is the whispering thought -- perhaps too extreme for some -- that having access to armor-piercing bullets may actually be a good and needful thing. Not because of any buck in a flak jacket and not for any righteous and enraged opposition to infringing constitutional rights, but because, increasingly, I can imagine a time when the government might deploy the troops under its command against its own citizenry.

Defending profits and barring the disbursal of wealth and bringing a populace to an ever-more-constricted living standard can only be quietly advanced in Congress for so long before someone -- some "kook" -- says, "Enough!" And if enough people agree that enough is enough, there is likely to be a reprise of the bloody labor conflicts of the late 19th and early 20th centuries. Eventually, the brokers with shot cuffs and lulling orations will make one refusal too many and it the barrel of a gun may become the only recourse.

And they're the ones with the metaphorical and literal flak jackets.
Posted by genkaku at 8:35 AM