It may be one of those old-fart concerns that can't hold a social candle to, say, an Apple watch or the latest hooker footware being marketed to women as 'fashionable,' but I kind of like the idea that Nevada is assaying a bill that would make it mandatory for grade-school kids to learn cursive handwriting.

Of course, the first snarky thought into my mind was, "Hell, I'd be happy to think they learned to read anything at all beyond Twitter feeds and Facebook," but that's too knee-jerk crotchety. Cursive strikes me as a useful tool. Not some tool to adore, but a good tool to use so ... why not learn a little?

There is something saddening about feeling it necessary to introduce a bill about handwriting, but that seems to be the tenor of the age -- wrangling about very basic things while chattering up a storm about how civilized and well-educated we all are ... put a man on the moon but opening the door to some new and improved war or other feckless, well-shod pastime: My life and desires are far to important to be burdened by or bothered with useless discipline.

I guess I took the same stance when basic Latin was a requirement in schools: "What the fuck for?!" my assured mind asked of a dead language. Still, to the best of my knowledge, Latin was never a matter for legislation. 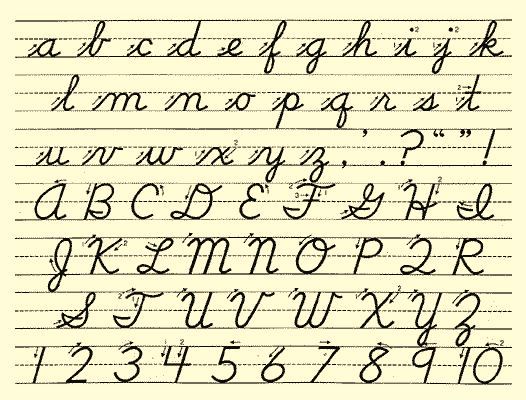