Like all friends, I guess, Bill McKechnie and I would, now and then, share and embellish and wallow in some whimsical future. And such was the case when I went to visit Bill in Chiefland, Fla., in 1980.

At the time, Bill lived in Florida and I lived in New York and I scraped up the money to fly south and visit him. We had both been German linguists stationed in Berlin in the early 1960's and remained friends though our geographical paths diverged. Bill got into collectibles/antiques/junk racket after trying unsuccessfully to follow his father's footsteps into professional baseball and I strayed into book publishing, then news reporting and then apartment painting. Bill was a laughter person -- someone whose mind could light and delight on anything and, like as not, turn it into humorous grist. I lived at the other end of that spectrum -- serious to the point of boredom -- but likewise intrigued by whimsical associations that could link anywhere and anything with anywhere else and anything else. Bill's humor could drive me nuts as my seriousness could drive him nuts ... a couple of nuts ... a couple of friends.

Anyway, this morning, for reasons I cannot fathom, I woke up thinking about Otter Creek, a mostly 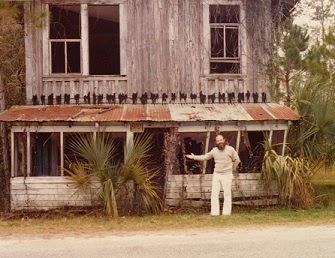 abandoned collection of houses Bill took me to visit in Florida. His vision -- which I embraced -- was that we would buy this ghost collection (neither of us had much money) and become legends in our own minds. I could be mayor and he could run the local whore house ... or vice versa ... or we could race goats ... or, since Otter Creek, or what we saw of it, was literally a ghost community, we could do anything we wanted, create any atmosphere we liked, rule like kings in whatever kingdom we decided to create.

No one lived in the Otter Creek we ambled through. Whimsy was about all that was left. And so we whimsied for a couple of hours, moving between and among the structures that someone had once taken some care to construct in order to ... in order to what? I'm sure Bill told me -- he had a history streak -- but I haven't got the energy to research my own journals. Wikipedia has stuff, including ghost tales.

I think Bill and I both liked Otter Creek, aside from anything else, because of its name. It was a plain name, a functional name, a name unembellished and in that lack of embellishment, somehow strong and straightforward and admirable. Someone had worked hard to create and nourish this place and now ... well, there was something eerie about what had been carefully crafted and now was cast off whole ... without even the decency of a funeral pyre.

Maybe that's the lot of the dead -- dead houses, dead people, dead empires --: To be at the mercy of whimsical travelers. And bit by bit whimsy overtakes us all.

Goat racing still appeals to me.
Posted by genkaku at 9:11 AM