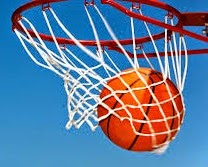 My wife reported that the neighborhood skunk had taken up residence under a backyard shed. She wanted to stack up rocks to deny the animal shelter. Me, I figure that like the cats and squirrels and rabbit that traverse the backyard, everyone -- from stinky to stinkless -- needs an occasional pit stop.

In the brilliance of a nippy, sunny morning, it is impossible not to make false deductions. The neighborhood woodpecker is working his or her ass off in some magical but audible distance. Sparrows are flirting and making whoopie on the telephone wires. A lone, winter-plump squirrel lope-hops up the street ... out in the open, not yet in the trees, testing, perhaps, the season. The Chickens of Valley Street, as I have dubbed them, are not in evidence, but I just know they're out there somewhere.

From all this and the wind in the high trees, I deduce something called "spring."

The universe of the TV is lifeless with megachurches, new discussions of old topics, sports recaps, advertising, and other season-less mold. Strange how the panning shot of a megachurch resembles the fans packed cheek-by-jowl at "March Madness," the college basketball tournaments currently in full swing.

Perhaps God is, in the end, "nothing but net!"

But don't tell the skunk that.
Posted by genkaku at 9:17 AM