Not only does the over-prescribing of antibiotics tend to lessen the beneficial effects of those antibiotics (some call it a crisis), but there has yet to be invented an antibiotic that will effectively mitigate plain old stupidity. Nor is education an adequate measure of the rising tide of just plain stupidity and its solution: Plenty of the best-educated minds seem to be affected by a better-camouflaged-but-nonetheless-rampant stupidity. Is there a pill for that? I don't know, but the rise of stupidity can get under my skin. On the other hand....


Gregg Popovich has called President Donald Trump “a soulless coward who thinks that he can only become large by belittling others” in response to Trump’s comment Monday that former President Barack Obama and other commanders in chief “didn’t make calls” to families of fallen soldiers.... 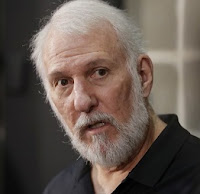 San Antonio Spurs [basketball] coach
Popovich has been an outspoken critic of Trump, but tells The Nation magazine that Trump’s comments Monday were “beyond the pale” and “as low as it gets.” He calls Trump “a pathological liar in the White House, unfit intellectually, emotionally, and psychologically to hold this office and the whole world knows it.”

Stupidity, however, is not daunted by even the most atomic criticism.

A 325-pound (150-kilogram) Florida woman is charged with killing her 9-year-old cousin by sitting on the child as punishment [while the parents looked on].
Veronica Green Posey, 64, was arrested and charged with homicide and cruelty toward a child, The Pensacola News Journal reported. The Escambia County Sheriff's Office report identified Posey as the girl's cousin.
Paramedics and deputies responded to the family's Pensacola home following a 911 call Saturday. Posey told deputies she sat on Dericka Lindsay as discipline "for being out of control."

A female comic whose name I've forgotten once proposed assisting in the return of a direct assault on stupidity by using the question, "what the fuck's the matter with you?!" It won't act as an antibiotic balm, but it feels somehow appropriate as it rolls off the tongue.

Stupidity is just so damned tiring after a while. And when you throw into the equation the fact that stupidity can and does cause death, well, compassion can take a holiday: "What the fuck's the matter with you?!"

Yes, I know: Explosions and epithets don't penetrate the cladding of the sociopath so everyone bends over backwards analyzing and soliloquizing about the poor, benighted creatures of this earth. Oh, if only they had gone to Harvard of Stanford! But then, the antidote loses its clout.

A "soulless coward." Mad dogs need to be put down.