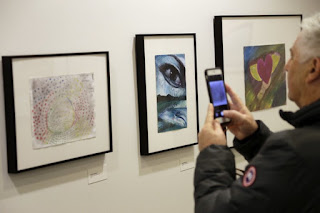 NEW YORK (AP) — An art exhibit at a New York City college seemed innocuous enough, mostly seascapes and still-life paintings of flowers and fruit.
But it’s the background of the artists — current and former terror suspects at the notorious Guantanamo Bay detention center — that drew protest and prompted the Pentagon to bar the further release of works created at the military-run prison.
The exhibit, Ode to the Sea, has been on display since October at the John Jay College of Criminal Justice. It shows 36 paintings and sculptures created by eight men during their years being held at the U.S. military facility for terrorism suspects in Cuba.

As grotesque as the idea of holding men for years without trial may be -- and Americans with more than two brain cells to rub together might say it's positively 'unamerican' -- there is something somehow 'grotesque-er' about wishing to disallow the display of their "art." The Congress hasn't got the nerve or coherence or decency to declare war and yet can offer its implicit stamp of approval to holding prisoners of war.

In my country, powerful men fucking or manipulating little girls is currently enjoying a moment in the hand-wringing spotlight. It's pretty revolting all right.

Maybe later the spotlight will get around to how and why it's OK to fuck grown men.