if it doesn't work, do it again 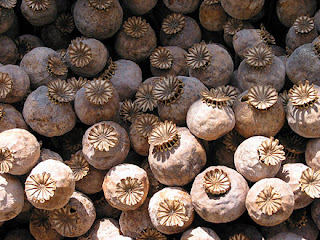 LASHKAR GAH, Afghanistan/KABUL (Reuters) - As U.S. and Afghan forces pound Taliban drug factories this week, farmers in the country’s largest opium producing-province and narcotics experts say the strategy just repeats previous failed efforts to stamp out the trade.
U.S. Army General John Nicholson, who heads NATO-led forces in Afghanistan, announced on Monday a new strategy of attacking opium factories, saying he wanted to hit the Taliban “where it hurts, in their narcotics financing”....

“The Taliban will not be affected by this as much as ordinary people,” said Mohammad Nabi, a poppy farmer in Nad Ali district in the southern province of Helmand, the heartland of opium production.
“Farmers are not growing poppies for fun. If factories are closed and businesses are gone, then how will they provide food for their families?"

When the Taliban, a scurvy lot to say the philosophical least, were in charge, such production was banned. And it worked. So it seems that the U.S. in all its wisdom is attacking the only group to have successfully achieved what the U.S. claims it want to achieve. Does that count as "enabling" and supporting the heroin trade?
Posted by genkaku at 8:19 AM