the seal of confession? 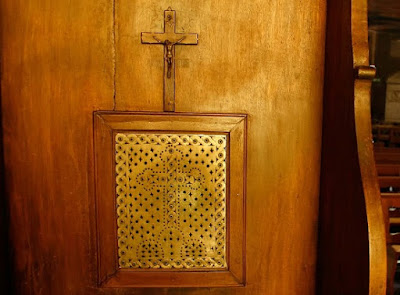 In August, a commission investigating child abuse in the Catholic church of Australia recommended that any failure to report suspicions of child sex abuse to the authorities should result in criminal charges – even if the discovery was made within the seal of the confessional. “We are satisfied,” the commissioners wrote, “that confession is a forum where Catholic children have disclosed their sexual abuse and where clergy have disclosed their abusive behaviour in order to deal with their own guilt.” The archbishop of Melbourne’s reply was unequivocal: the seal could not be broken, and if that meant going to jail, well, so be it.

On the one hand, how wondrous to be absolved of child abuse or any other catastrophe.
On the other hand, how horrific the hidden fallout.

Who would not give a lot to feel/believe the weights might be taken or fall away?
Responsibility is a crucifixion and you don't need to be a Roman Catholic to know that.
Posted by genkaku at 6:04 PM