Clinton, Brazile and a dash of sexism?

I don't/can't generally keep up with political confetti, but there was something about the Nov 5 story of former Democratic National Convention head Donna Brazile and her book (due out tomorrow) that caught my eye although it was not the focus of the brush fire Brazile has apparently stirred up:


Former Democratic National Committee head Donna Brazile writes in a new book that she seriously contemplated setting in motion a process to replace Hillary Clinton as the party’s 2016 presidential nominee with then-Vice President Biden in the aftermath of Clinton’s fainting spell, in part because Clinton’s campaign was “anemic” and had taken on “the odor of failure.” 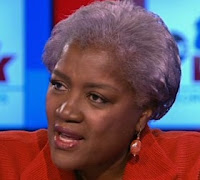 In an explosive new memoir, Brazile details widespread dysfunction and dissension throughout the Democratic Party, including secret deliberations over using her powers as interim DNC chair to initiate the process of removing Clinton and running mate Sen. Tim Kaine (Va.) from the ticket after Clinton’s Sept. 11, 2016, collapse in New York City.
Brazile writes that she considered a dozen combinations to replace the nominees and settled on Biden and Sen. Cory Booker (N.J.), the duo she felt most certain would win over enough working-class voters to defeat Republican Donald Trump. But then, she writes, “I thought of Hillary, and all the women in the country who were so proud of and excited about her. I could not do this to them.”
Brazile paints a scathing portrait of Clinton as a well-intentioned, historic candidate whose campaign was badly mismanaged, took minority constituencies for granted and made blunders with “stiff” and “stupid” messages. The campaign was so lacking in passion for the candidate, she writes, that its New York headquarters felt like a sterile hospital ward where “someone had died.” [Washington Post, Nov. 4, 2017; emphasis added throughout]

Dawdling into the past doesn't appeal to me much. 2016 has come and gone. And so perhaps it is just a personal leaning that wishes Brazile had taken the counsel of her "anemic" assessment. And further, that reporters had picked up on the comment that she "could not [replace Hillary Clinton]" at the expense of all those excited and proud American women supporters. What did that mean? Was Brazile falling prey to the notion that women voters deserved to be thrown a sexist bone because of the bad historical treatment they had received? Did she imagine women voters were really that superficial? How would her statements be greeted if the word "men" were substituted for "women?"

Of course, Brazile's second-hand account may be fobbed off on her need to have a back-up plan if Clinton's illness were more than the pneumonia that was subsequently used to describe her fainting fit.

Full-frontal concession: I held my nose and voted for Clinton. She struck me as one of the good ol' boys in girl's clothes, but I didn't think Sanders could win and I wanted to vote against Trump. Clinton, I guessed, would prosecute America's longest war in much the same way her mentor predecessors might and doing something about student debt or income disparity or health care was more a talking point than a reality check for her. But she was an awful flat tire as a campaigner and candidate.

So I hate to think Brazile gave in to a rah-rah version of the women's vote. I would rather think her motives were tactical ... but obviously I am not sure. Clinton was anemic and sterile and Joe Biden struck me then and now as a better mouse trap.

But it's over... except as the Democrats do what they can to shoot themselves in the other scaredy-cat foot in 2018.
Posted by genkaku at 10:47 AM