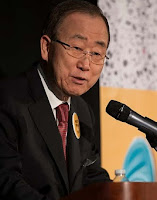 And a tip of the hat to former U.N. Secretary General Ban Ki-moon, who on Tuesday delivered what I assume will be a wildly disregarded speech in which he urged the United States to get off its ass and adopt universal health care.


The former UN secretary general Ban Ki-moon called on Americans to pass universal health coverage at a speech in New York City on Tuesday, marking a dramatic intervention of world leaders into the US healthcare debate.
Ban called on the US to stop “powerful interests” from prioritizing “profit over care” as part of a global delegation pushing the US to adopt a publicly financed health system similar to those in other wealthy countries.
The US spends more on healthcare than any nation in the world, yet 28 million Americans still lack care....
Of the 25 richest countries in the world, the United States is the only one without universal health coverage.

Far be it from the Democrats, who are licking their chops over what they may imagine will be mid-term election victories, to take up this effort without equivocation.