the power of 'the bird' 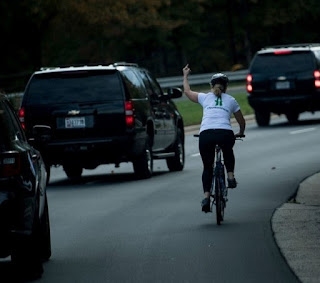 Passed along in email as well as floating around the news wires is the tale of/column about a woman who flipped off (gave the middle finger to) the presidential motorcade, told her bosses about it, and was promptly fired.

On Halloween, after Briskman gave her bosses at Akima, a government contracting firm, a heads-up that she was the unidentified cyclist in the photo, they took her into a room and fired her, she said, escorting her out of the building with a box of her things.
“I wasn’t even at work when I did that,” Briskman said. “But they told me I violated the code-of-conduct policy.”

Aren't there ANY grown-ups out there?