the "First Church of Artificial Intelligence" 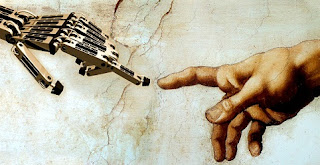 Passed along in email today came this article about a start-up church of artificial intelligence.

My first snarky reaction was, "Go out and play in the street!"

But then, because someone is bound to buy in and because there may be something to buy into, I responded to my friend who sent it along:

Will it be benevolent, will it be belligerent, can (wo)men shape and control it ... ??? Questions abound and I am suspicious of anyone (including me) who says s/he is capable of seeing the outcome. One yardstick I have started using lately is the question "Does it fold in failure?" AI doesn't seem willing to fail ... which makes it inhuman ... not to mention boring and, from a human standpoint, malevolent.

It is interesting how, in one way or another, articles try and try and try again to get a handle on the whole matter -- as if an explanation were going to explain, and hence control, this brave new world.