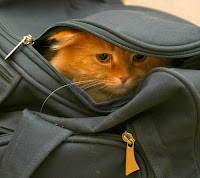 And when it comes to letting a cat out of the bag -- not entirely, mind you, but close enough -- there is the case of and Israeli diplomat who goofed:


JERUSALEM (Reuters) - A top Israeli diplomat was rebuked by Prime Minister Benjamin Netanyahu on Thursday for suggesting that American Jews have a poor commitment to service in the U.S. military....
“Most of the Jews don’t have children serving as soldiers, going to the Marines, going to Afghanistan or to Iraq,” [Deputy Foreign Minister Tzipi Hotovely] said on i24 TV news on Wednesday.
According to a 2009 survey published by the congressionally-mandated Military Leadership Diversity Commission, an estimated 1.09 percent of the members of the U.S. armed forces are Jewish. The Pew Research Center estimated in 2013 that Jews make up about 2 percent of the U.S. adult population.

Naturally, Netanyahu rebuked Hotovely, who is in other times a Netanyahu ally. "Anti-semitism" was shoehorned into the critique. Israel has too much riding on its links with the U.S. to have some upstart rattling the financial apple cart.

But my feeling is that Hotovely's observations do not need to be reined in -- they need to be expanded beyond their Jewish flavorings to include a majority of Americans of whatever religion. Congress -- remember when they represented the country? -- has not mustered the nerve to declare war in the Middle East where it is fighting "wars" if the media are to be believed. Dead American bodies are being shipped home under a decorous and politically-useful anonymity. And the Veterans Administration copes with wounds that may be worse than death. It sure smells like "war" to me. Isn't it time that those who know how to don cuff links commit their spawn or ... get out?