go out and sin some more 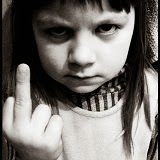 When young people ask me -- as they rarely do -- about Zen practice and then go on to display some zealous desire to get involved, a prickly imp begins wildly waving his arms in my mind ... he wants to have his say and is determined to say it, though I seldom give him the chance.

What he wants to say is the same thing he has wanted to say for years: "Go out and sin some more."

The imp has been insistent, adamant and assured: Without making some serious mistakes, without the fiery experience that has raised painful blisters, without (put bluntly) fucking up, the meaty, juicy savor of Zen practice goes begging. Age has a way of enriching fuck-ups and sorrows where youth, more often than not, has barely scratched the surface.

As I say, I have generally kept this imp in check. But today it occurs to me that keeping him in check is just another way of assuring his good health and boundless energy.

More important than that, however, is this: What makes me think that signing on with Zen practice is not the very sin that this imp has been encouraging all these years? What makes me think that (implicitly or explicitly) Zen practice is a blessed realm from which sin is somehow excluded or within which all that has been painful and wrong will somehow become healed and right ... bright and pure and worth defending from tarnished interlopers like "sin?"

Today I think I have made a big mistake.

Zen practice is as good a sin as any other.

I am sorry for my mistake.